It’s humid, my head hurts, and I had to turn on the air conditioner for the first time this year. (Last month’s electric bill was about $40.  Compared to my electric bills in Houston, TX, where I used to live, that’s a bargain.)

The weather is such a tease here in the Q… Lots of threatening clouds and wind, even a little thunder, but no freaking rain.

Somebody’s car alarm just went off — that’s unusual.  In Houston, it happened all the time.  Like every other day.  Sometimes the alarms went off for hours and everybody just ignored it. (Calling the apartment manager after hours to complain was useless.)  I can’t tell you how much quieter it is here in Albuquerque compared to Houston.  The only people up after 10pm are the graffiti “artists,” and they tend to be very quiet.  (Not like my neighbor’s yippy dog.)

Ah, the car alarm has stopped.  Time for a nap.  When my head explodes, I don’t want a mess all over my computer… it’ll be easier to clean off the couch. 🙂 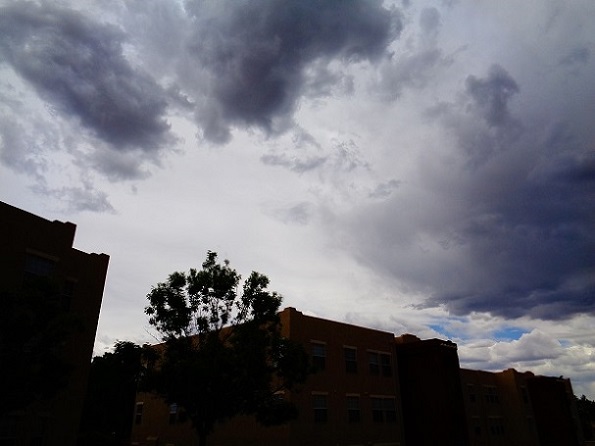 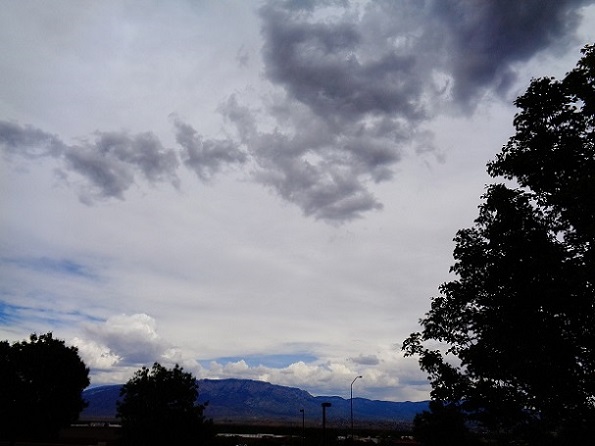 Photo taken about an hour and a half ago.

In front of Walmart today, there was a group of about 5 people collecting for the Special Olympics.  They were older people, all wearing reflector-type vests — I guess so people wouldn’t run them over.  (And to make them look official.)  I don’t know if these kinds of jobs pay anything, or if they’re just volunteers, but it’s obviously not the best way to spend a Saturday.

I don’t understand why the Special Olympics is trying to collect from Walmart customers.  Don’t they understand how broke everyone is, especially if you’re forced to shop at Chinamart?  (I mean, Walmart.)

And I don’t know those people begging for money — are they really with the Special Olympics? Just because it says so on their cans?  (Which they forced in front of me as I walked by.) How do I know where the money ends up?

And here’s a clue if you’re trying to beg poor people for money:  A smile and friendly voice work much better than a frown and monotone delivery.  (I dunno, maybe the poor guy was constipated.)

Most Walmart customers just ignored them, but at least I responded:  “Not today, thanks.”  I also had to repeat myself as I left the store — like the dude didn’t hear me the first time, 10 minutes ago when I entered.

Back when I was in the Medical Cannabis Program, I was a much nicer person.  Something like this wouldn’t have been enough to compel me to rant about it, taking up internet space… Although I don’t give money to the Salvation Army when they hang around in front of stores during Christmas either, the year I was in the program, I did have an occasion to share chocolate with the poor woman who had to ring that bell all day.  (I miss bud.)

I also don’t like it when those working at the cash register ask me to donate to some cause. I know they have to, but it seems more like a shaming tactic, and it makes me uncomfortable. When the employee asks if I want to donate, my first thought is to say, hey, how can I become one of your company’s causes?  Get strangers to donate money to my cause?  Maybe help me buy two new tires for my car?  Pay for my renewal in the Medical Cannabis Program?  Is there a company form I can fill out to be considered for this honor?

I prefer to give what little I can to the homeless people I run into.  If I give cash, I don’t care what they buy with it — at least I know it’s not going to some corporate charity.

Wikipedia:  Cinco de Mayo (Spanish for “fifth of May”) is a celebration held on May 5. It is celebrated in the United States and in Mexico, primarily in the state of Puebla where the holiday is called El Día de la Batalla de Puebla (English: The Day of the Battle of Puebla). Mexican Americans also often see the day as a source of pride; one way they can honor their ethnicity is to celebrate this day…

Displaying beer in front of the baby section at Walmart… Makes it rather silly for cities to require dispensaries be a certain amount of feet away from schools and other public buildings (even though pharmacies don’t have the same requirement).

Data from the 2012 National Survey on Drug Use and Health showed that 60 percent of pot users go on to try other drugs, which might seem to prove the “gateway” theory, except that 88 percent of drug users started with alcohol, according to several studies reported in The Atlantic…

“Gateway” is a problematic term in that marijuana use is not a tipping point but rather part of a process; this fact underscores a significant flaw of the gateway theory. Scientists tell us that correlation does not imply causation.

Miriam Boeri, a sociology professor at Bentley University does not believe one type of drug use leads to another. In an article for The Conversation, she pointed out that poverty, mental illness and peer group pressure are all much stronger predictors of drug use.

Scientist Denise Kandel of Columbia University, who coined the term “gateway drug,” told NPR last week that she recently published a new paper on the topic, which shows nicotine is biologically the most potent gateway of all. When rodents were primed with nicotine, then given cocaine, they liked the cocaine much more…

The people behind Treatment4Addiction, a website for finding addiction treatment, recently parsed the data from the 2012 National Survey on Drug Use and Health to see which drugs people tried right before and after they started using a given narcotic. (Click the boxes at the left to highlight a drug. The diagonal lines leading up to it show the percentage of people who tried a given substance immediately before that drug. The lines to the right show the drugs they tried right after.)

It’s too bad we can only compare some drugs, not all.  If you think about the first drug you were ever given, was it Tylenol?  Sugar?  Processed food and chemicals?

It’s fun data to play around with (who are these insane hipsters who snorted cocaine before they ever drank?), but the creators caution that it’s important not to read too much into it: “These are snapshots of people of different ages, and some of them may go on to try other drugs in the future,” they note.

What’s more, these lines aren’t gateways, per se. They’re more like pathways, revealing the trajectories drug users tend to take as they bounce from one substance to another (or, in many cases, simply stick with their drug of choice)…

His father was an abuser. Now that Patrick Stewart knows PTSD was a factor, he has a message.

James Saunders (featured in the video) didn’t start having PTSD symptoms right after returning home. It wasn’t until he had a totally unrelated personal tragedy that brought his war experiences flooding back…

1 in 5 veterans develop PTSD or major depression. But 4 in 5 don’t. Don’t assume every veteran is suffering from a mental illness. Veterans are disproportionately affected by mental health issues, but they aren’t the only ones. 1 in 4 college students have been seen by a mental health professional in a given year, but no one assumes that of them…

Combat Stress, the charity Patrick Stewart spoke about, and the National Health Service are the primary ways British vets get care for war-related mental health issues…

People who experience abnormal thoughts, feelings, or behaviors that could be attributed to mental health issues don’t seek help because of shame. PTSD symptoms have been stigmatized ever since the “shell shock” days. Veterans who had difficulty adjusting after war were called cowards, lacking in character, malingering, whiny, or weak. To this day, the stigma associated with mental health issues is one of the chief barriers keeping service members and veterans who need care from seeking it out — even if it is available…

…holding up two clouds with his fingertips. 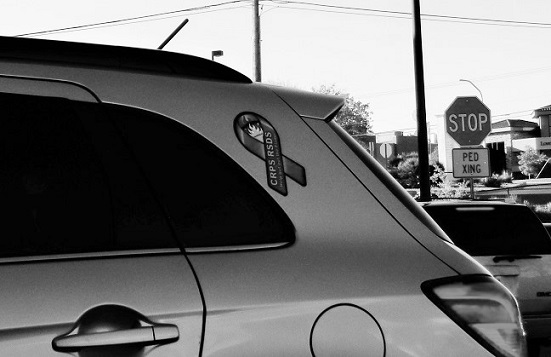 Racial disparities in health are well-documented and represent a significant public health concern in the US. Racism-related factors contribute to poorer health and higher mortality rates among Blacks compared to other racial groups. However, methods to measure racism and monitor its associations with health at the population-level have remained elusive. In this study, we investigated the utility of a previously developed Internet search-based proxy of area racism as a predictor of Black mortality rates. Area racism was the proportion of Google searches containing the “N-word” in 196 designated market areas (DMAs)…

The unveiling of the banner allegedly comes at a time when the debate as to whether same sex couples in the USA should have the same marriage rights as straight people intensifies. However, some residents have hit out at the extreme views fearing that they will incite violence against homosexuals. But, abomination it is, if the pastor is quoting from the scripture which is enough proof that God Almighty considered homosexuality a death-worthy crime – amen!

All Saints save humanity!

I try to not hold people’s religious beliefs against them, but in this Pastor’s case, and now in yours, I don’t have any choice. There’s nothing wrong with being gay. Period. End of sentence. And there are very few crimes that are death-worthy, especially when the government is the one doing the murdering.

Who’s going to murder all the gay people in this messed-up belief system?

What happens when atheists outnumber religious people, and then the extremists believe being religious is a death-worthy crime?

Goodbye, Mike Sedona. This post was enough to keep me from ever visiting your blog again. Amen!