I tried out this recipe, with just a few changes: 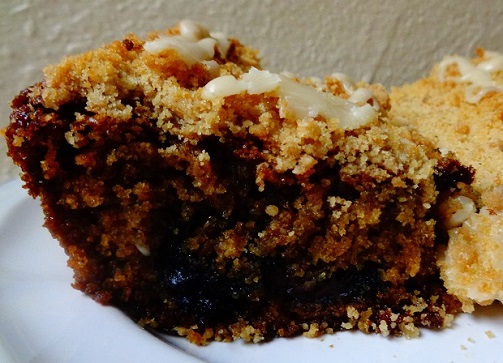 And of course, adding icing. I poked holes in the top of the crumb cake, hoping the icing would trickle down into the cake, but the icing was too thick to penetrate the topping. But the cake was moist enough on it’s own, and I enjoyed scraping the topping off of one piece before eating the rest.

If you squint, you can see two gay angels dancing within the crumbs.

Can you see them now? 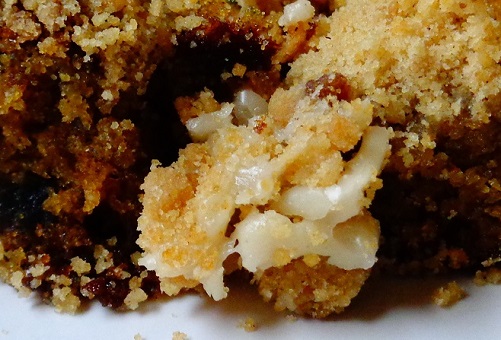 Thanks for the recipe, Lisa. If you have time, check out her blog at the above link.

Our current obsession with opioids is just the latest trend in a long history of scapegoating single drugs: alcohol in 1830s and 40s, opium in 1870s, marijuana in the 1950s and 60s, crack cocaine in the 1980s and 90s, methamphetamine in the 1990s and early 2000s and now, opioids like heroin, Oxycontin and Fentanyl. The problem of multiple-substance use has remained absent from much of this conversation – and from the education of users and health practitioners – despite the fact that drug mixing is both dangerous and pervasive…

By fixating on fearing opioids, we are missing the more culpable factors that lead some people to keep using drugs despite negative consequences. Opioid use on its own is not dangerous, and it’s time we stop demonizing it. Instead, we must implement a national overdose education strategy targeting the immediate factors of opioid-related overdose: drug mixing and tolerance changes.

cowboy335 2d ago
The thing politicians and others don’t understand. We have a pain epidemic not a drug epidemic. People are in mental and physical pain from life and the controllers of medicene say no. What do you do . Heroin, methadone, vicodan. I am a 64yr old combat Vietnam Vet. I take what I need for pain. I do believe I am old enough and don’t need others to decide for me. That happened when I went to serve in Vietnam. Freedom even if they don’t decide to free me. I have freed myself.

panamadave 2d ago
I am 70 years old and in pain. I really don’t give a damn what some politician wants me to do

Samson151 2d ago
I think the author may have misinterpreted what happens in an OD situation. The user combines an opioid with other CNS depressants in order to overcome his or her greatly elevated tolerance and once again get high. It’s the same motivation that drives addicts to seek out new varieties of heroin laced with fentanyl. It’d be wrong to assume that if we could just convince them to stick to opioids only they’d be fine — they’re not going to do that. From the addict perspective, the opioid is no longer enough…

There are many reasons that pain patients take more than just painkillers, including drugs like muscle relaxers, anti-anxiety meds, antidepressants, anticonvulsants, and blood pressure meds. Suffering from chronic pain is not just about the pain and many patients have comorbid conditions. And all of these additional meds can work in conjunction with painkillers, increasing their effectiveness. Because, let’s face it, opioids can only do so much. And remember, even though opioids work for most people, there are still millions of people who can’t take them.

One of the shortcomings of an opioid is that it treats pain and that’s it. And when there’s pain, there’s usually more to treat than just the pain. But then, most drugs are focused on treating only one condition, just like opioids. Then some people end up taking a bucket full of different drugs to treat each symptom, on the advice of doctors. And this can result in overdose and death, even if it’s only in a very small portion of most patient populations (with the exception of those who suffer from addiction).

When the drug war ends, the overdose and death rate will decrease significantly, but it will never be zero. We’re humans, not robots, and mistakes will be made, both by patients and doctors. But keep in mind that more mistakes are made by doctors — the so-called professionals — than by patients themselves.

This would be a good time to point out one of the benefits of cannabis, in that it treats more than one symptom, no matter what your medical condition. For some patients, it will be able to replace that bucket full of pills, but not for all.