What does YouTube have to say about chronic pain? My search uncovered the following videos:

I found an interesting and informative talk by a Professor of Anesthesiology at the University of Michigan to actual pain patients (2013):

I think this doctor is trying to change the wording of how we talk about subjective pain, referring to conditions like fibromyalgia as “brain pain,” as opposed to peripheral pain. He’s saying that, yes, the pain is all in your head, but there’s a reason for that, and it’s not because you’re imagining it.

As a pain patient, that’s the message I got; but if you work for an insurance company, the only message you’d hear is that fibromyalgia pain isn’t really real. The pain is an amplification of reality — it’s only your perception of the pain that makes it severe, and your perception has now been deemed overactive. And even though your DNA is partly to blame, your sensitivity to pain is nothing that can really harm you or your body, so your treatment options are restricted and limited.

And if I’m not mistaken, this doctor believes that fibromyalgia is a case of hyperalgesia, just not always caused by opioids. But he also says that opioids are making chronic pain patients worse, actually causing fibromyalgia and central pain syndromes.

I’ll tell you what, this doctor is very convincing. If not for my own experiences, I might have believed him. But the real proof of whether hyperalgesia exists is in the discontinuance of the opioid therapy.

Now that I’m off all the pills, how come I’m not one of these alleged patients who got better? How many patients really do get better when opioids are terminated? If opioids are causing hyperalgesia in some patients, what about the other patients who don’t have that problem? From the stories I’ve read from pain patients, the only thing that happens when opioid treatment is withdrawn is more pain, so I’m not the only one.

While I found this talk interesting, my take away from the video was that anyone who suffers from chronic pain also suffers from a central pain syndrome — and that means pain medications are not for you.

How will your doctor tell you that he’s refusing to prescribe any more opioids? For this biased re-enactment, we’ll need an example of a pain patient who’s abusing his medications (the patient portrayed in the video has been monitored by the PDMP, which shows he’s received multiple prescriptions for Lortab from different doctors):

In real life, this patient would be behind bars after this visit, especially since he refused the doctor’s suggested treatment (Suboxone or bupe). And just to show you how inaccurate the portrayal of the pain patient is, this guy keeps asking for stronger pain medication — I don’t know any pain patient who would do that, knowing they would be risking whatever limited access they still have.

And I’ll just add that most of the stories I’ve read about patients forced to discontinue opioids involve doctors notifying patients by letter, or just abandoning them altogether by refusing to see or talk to them.

Here’s a sarcastic take on a patient’s first visit with pain management:

petmom ful 10 months ago
I signed the contract and did everything right. They still treated me like a criminal. I hated the whole thing. It was a terrible experience. The drugs made me sick, yet they pushed more and more on me. They would not listen to anything I said. The dr. told me I was a fail and had shut myself off from further treatment. I could not bear any more injections. PT made me so bad that I could not even get on the table after 7 weeks. I told him that would happen but he did not listen. He treated me like a degenerate and yelled at me. They would not even take the time to look at the PT report that had been faxed to them. I made my husband go into the room with me, so maybe they would treat me with a little more respect. I sat across the room so they could not grab my head and jack it right and left to check my range of motion. The drugs made me sick, angry, and upset, then they labeled me a nut. Every appt. I made was screwed up! They give you just enough meds to last to your next appt, then they screw up your appt. and you reschedule. Now you don’t have enough meds to last! Too bad! If you decide you can’t take it, and change doctors, you are now a dr. shopper. It is hopeless. No more pain management for me! I realize not everyone can do without it, but I am managing and I don’t plan on going back.

Finally, here’s our own Payne Hertz’s take on a pain patient’s ER adventure:

In the early afternoon, on the day before Christmas Eve, I drove my neighbor to the train terminal. I’ve never ridden the train before, so she was filling me in on the experience. Did you know there wasn’t any heat on the train? How weird is that?

Apparently, there’s a lower deck on the train for the disabled, and if you want a drink or snack, you have to go up the stairs to fetch it. I asked about the bathrooms… and then I stopped asking questions. 🙂

When we left for the train station, I took a picture of this very creepy-looking snow cloud. Reminded me of somebody floating in the water…

Here we are at one of Albuquerque’s infamously-long red lights (which just turned green, I swear). And the cloud appears to be following us… 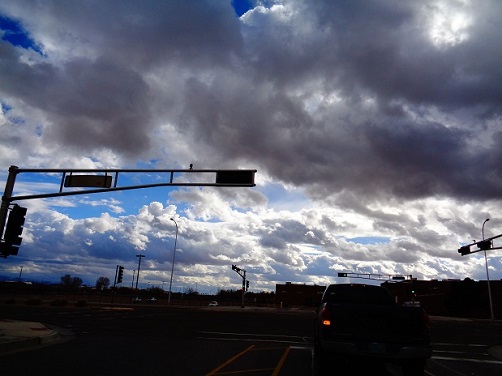 This is what traffic looks like in the Q: 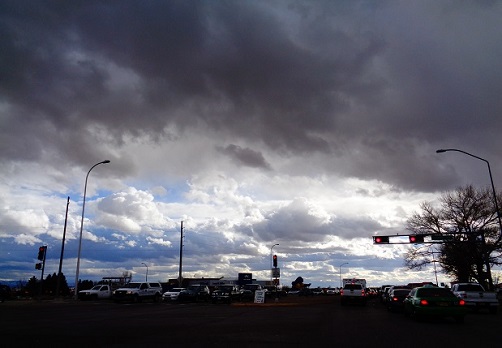 Even more traffic (shout out to Delancey Street Movers): 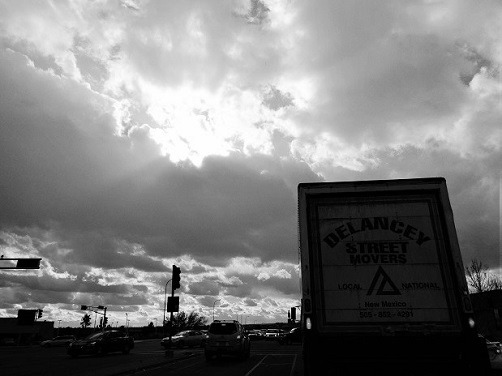 Traffic is so boring (can I escape from the creepy cloud?)…

Here I am going home, behind a bus that’s flashing a sign that says “Happy Holidays!” Rather distracting, if you ask me…

When I arrive home, I see that the cloud has returned to its own home, my mountain:

And that’s how I escaped the creepy snow cloud 🙂