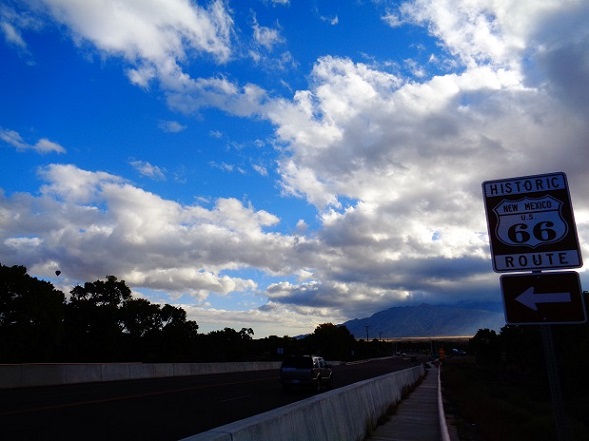 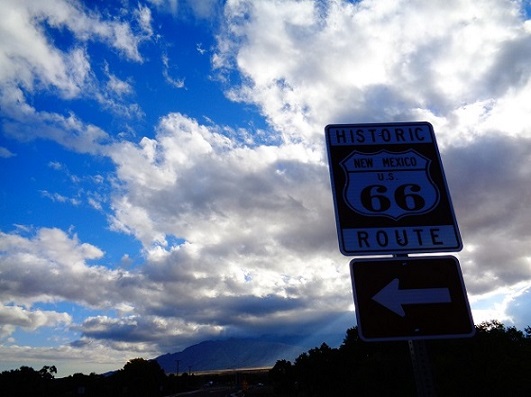 From Wikipedia:  U.S. Route 66 (US 66 or Route 66), also known as the Will Rogers Highway and colloquially known as the Main Street of America or the Mother Road, was one of the original highways within the U.S. Highway System. Route 66 was established on November 11, 1926, with road signs erected the following year. The highway, which became one of the most famous roads in America, originally ran from Chicago, Illinois, through Missouri, Kansas, Oklahoma, Texas, New Mexico, and Arizona before ending at Santa Monica, California, covering a total of 2,448 miles (3,940 km). It was recognized in popular culture by both the hit song “(Get Your Kicks on) Route 66” and the Route 66 television show in the 1960s.

Most of my readers and followers are not chronic pain patients. And of the two chronic pain blogs that I read without fail, one blogger hardly ever visits my home on the internet, and the other has a habit of posting articles that I’ve posted, only days or weeks later. It’s obvious to me that very few people are interested in what I have to say about chronic pain.

I’ve come to believe that pain patients have already lost our drug war, so I have to wonder what I’m fighting for. (Hey, that rhymes.) From this point forward, my blog will be less about chronic pain and the drug war, and more about… well, I haven’t figured that out yet. Let’s just wait and see, shall we?

Please feel free to give me ideas or preferences of what ya’ll would like to see on my blog. If not, well, I’ll just assume you agree with me.

Kentucky Pain Care of Lexington was founded on the principles of total patient care and satisfaction. Our goal is to find the root cause of your pain condition and treat you with a holistic approach…

Lisa B. (10/01/2015)
If I could give this office no stars I would. I waited six months to get an appointment and in July 2 weeks before my appointment they sent me a letter stating that due to unforeseen circumstances they could not see me and reschedule my appointment for October 1st. I went to my appointment today and filled out all the paperwork. Last week I had called to verify my appointment time what time to arrive and if I needed to bring anything with me. After filling out all the paperwork I was told they could not see me because I had been in an automobile accident in 2009 and that they would need insurance papers from the auto insurance stating I had no claims open. They said there was absolutely no way they would ever see me and told me to call my attorney which I did but due to this case being so long ago my paperwork was stored offsite I went back to the front desk and was told very rudely they don’t care. They then took me into another office as I had tears in my eyes and gave me Kleenex and told me to calm down I could not stop crying but I was not loud they then proceeded to take me into another little cubby hole where I was told that I had to stop crying and leave the office immediately. I will never walk back in this office ever again and on top of all this the office in waiting area was filthy dirty.

disgustedpateint (05/07/2013)
Stay far away from this clinic if your in chronic pain Dr Gilbert and his staff has no regard or any sympathy whatsoever for a patients pain status, all he cares about is if your going to church, and treats you like a drug addict with criminal intent . I have never ever been treated this badly by any Doctor. I’ve lived with this chronic pain for over 10 years, had almost every procedure, injections, various treatments including a pain pump implant, and of course pain pills. As of today He took my pain pills away and told me I had to go to church. And you will wait at least 5 hours for the privilege, of seeing this Doctor(GOD) only to get no satisfaction.

growshop (12/30/2012)
Don’t go here!!!!
I have Diabetes Lost part of my left foot!!! Have broken my hip with two hip replacements that have not worked And I live in severe pain every day and there’s doctor told me I did not need pain medication I needed Tylenol

usarmymedic1
Mar 31, 2008
Addictionology is not a medical specialty recognized by the American Medical Association. Most addictionologists are physicians or others that went to rehab and couldn’t practice in their trained specialty anymore because their reputation was ruined. So they become consultants for rehab facilities or otherwise. The “science” of addiction is very much in it’s infancy, and the methods used are unproven by scientific studies. For instance, the rate of recovery from cigarretes and alcohol over a 5 year period of time is the same for those who go into rehab and those who don’t. Addictionology is a pseudo-specialty based on pseudo- science, populated by health professionals long on sincerity and short on science. Maybe someday we will understand addictions properly.

In Dora Byrd’s case, MSD went after her bank account. She’d been living primarily off of a monthly $600 Social Security check. It’s illegal for federal benefits to be garnished, but at the time, she had both a checking and a savings account, and only the money electronically deposited into her checking account was automatically protected. As a result, MSD was able to seize $645 from her savings account, more than a third of the money in her accounts, according to bank records…

Even if Turner had appeared, it’s unclear that it would have done her any good. With an attorney, however, she might have gotten the case dismissed. That’s because the statute of limitations on Turner’s loan under Missouri law was four years, a period that had long expired by 2013…

painkills2 5 hours ago
How long does it take ProPublica to approve a moderated comment? Oh, just forget it, I’ll post it on my blog.

painkills2 13 hours ago Pending
So, debt buyers don’t know the race of their customers? Can’t ascertain race by any of the information in the file? Like where they live? Or from a credit report? These places don’t use data brokers? Well, when you work for debt buyers, I guess lying just comes naturally. And shame never enters into it.

It should be illegal to file a lawsuit after the statute of limitations has passed. None of the lawyers who I’ve worked for would do that — it’s unethical and should be considered malpractice. Where is the State Bar? I guess State Bars don’t want to lose any of their membership fees. And I guess there are plenty of lawyers who don’t know what shame is either.

The lawyers that work for these creditors know that the debtors don’t have the legal know-how to defend themselves. Easy pickings. Of course, everyone knows that the legal system only benefits the rich, while screwing the poor. When my long term disability insurance company (Unum) terminated my benefits after 7 years, I needed an ERISA lawyer, but it’s not like I’ll ever have access to one.

Perhaps corporations (and universities, etc.) should divest from these types of creditors, just like they’re divesting from the oil and gas industry. Or maybe that would be impossible, seeing how most of these creditors are funded by Big Banks.

Reid, 75, had been exercising at home with a Theraband, a rubber-band-like exercise contraption. It either slipped from his hand or broke — no one seems to know which — causing Reid to slam his face into a cabinet.

Now the Nevada Democrat has filed suit against Performance Health, saying the company should have included a warning in its packaging. He says he suffered severe pain and injuries, including broken ribs and facial bones, a concussion, scarring, and loss of vision in his right eye.

Witman, who works out of a Fall River Canna Care clinic, says he has treated about 80 patients who were addicted to opioids, muscle relaxers or anti-anxiety medication with cannabis using a one-month tapering program. More than 75 percent of those patients stopped taking the harder drugs, Witman said.

Cannabis, Witman said, can treat the symptoms patients had been using opioids to manage, such as chronic pain or anxiety — and treat them far more safely…

Howard Bart, a patient at Dhanabalan’s clinic, knew very little about medicinal marijuana before his wife researched the topic online. He says it has been a life-changer for him:

After four back surgeries, he had been on various painkillers for more than 20 years — until he started taking cannabis this year. He has not had a pill in seven weeks.

“The marijuana saved my bacon from discomfort and pain every time,” he said. “My doctor told me it has something to do with receptors. All I know is, it works.”

Q. Are applicants or employees who are currently illegally using drugs covered by the ADA?

A. No. Individuals who currently engage in the illegal use of drugs are specifically excluded from the definition of a “qualified individual with a disability” protected by the ADA when the employer takes action on the basis of their drug use.

Q. Is testing for the illegal use of drugs permissible under the ADA?

A. Yes. A test for the illegal use of drugs is not considered a medical examination under the ADA; therefore, employers may conduct such testing of applicants or employees and make employment decisions based on the results. The ADA does not encourage, prohibit, or authorize drug tests.

If the results of a drug test reveal the presence of a lawfully prescribed drug or other medical information, such information must be treated as a confidential medical record.

Q. Are alcoholics covered by the ADA?

A. Yes. While a current illegal user of drugs is not protected by the ADA if an employer acts on the basis of such use, a person who currently uses alcohol is not automatically denied protection. An alcoholic is a person with a disability and is protected by the ADA if s/he is qualified to perform the essential functions of the job. An employer may be required to provide an accommodation to an alcoholic. However, an employer can discipline, discharge or deny employment to an alcoholic whose use of alcohol adversely affects job performance or conduct. An employer also may prohibit the use of alcohol in the workplace and can require that employees not be under the influence of alcohol.