“Usually bitter adversaries, Koch Industries and the Center for American Progress have found at least one thing they can agree on: The nation’s criminal justice system is broken.

Koch Industries, the conglomerate owned by the conservative Koch brothers, and the center, a Washington-based liberal issues group, are coming together to back a new organization called the Coalition for Public Safety. The coalition plans a multimillion-dollar campaign on behalf of emerging proposals to reduce prison populations, overhaul sentencing, reduce recidivism and take on similar initiatives. Other groups from both the left and right — the American Civil Liberties Union, Americans for Tax Reform, the Tea Party-oriented FreedomWorks — are also part of the coalition, reflecting its unusually bipartisan approach.”

I’ve read the news about the Koch brothers trying to convince everyone that they’re interested in prison reform.  The problem I have with that are groups like this:

It’s like when banks spend money to help home owners stay in their homes — considering the amount of money they stole from home owners around the world, that money they spend to “help” people is very minimal in comparison.

If you have auto insurance you probably understand that staying out of an accident is the best way to keep your rates from going up. Filing a claim almost always results in a rate hike.

Insurance companies, which measure risk when they decide who to cover and how much to charge, also look at your driving record. Getting tagged with a moving violation, such as speeding, will result in higher rates…

If insurance wasn’t such a scam, then why don’t rates go down when you have no moving violations at all?

A report by insuranceQuotes.com found drivers ticketed on a DUI charge will pay a national average of 92% more for car insurance. North Carolina residents will be hit much harder, with an increase of 337%, while drivers in Maryland will only see their rates go up 15%…

The report shows more minor infractions also vary in the penalty dished out at policy renewal time. Driving without a license in Maryland raises rates by 95% but the same infraction has no consequence in Rhode Island…

But why the sharp disparity among states in how a violation is treated? Consumer advocates say it has a lot to do with how individual states regulate the insurance industry.

For example, in some states insurers can use a wide variety of rating factors that aren’t connected to how someone drives. Other states are much stricter about the reasons an insurance company can cite to raise auto insurance rates…

This looks like a good example of why some things should be regulated by the federal government.  Why should a driver in North Carolina have to pay more than someone just across the state line?

Circa… the stone age.  In fact, I think I have a photo of Fred and Wilma Flintstone around here somewhere… 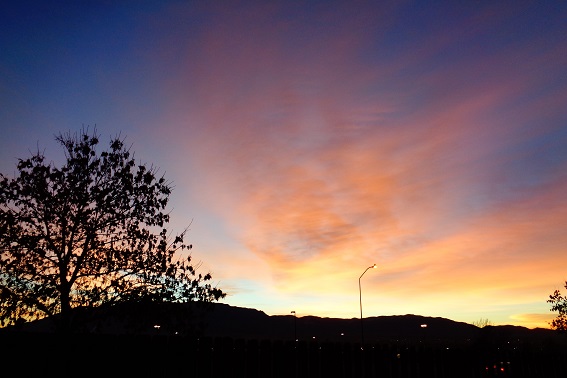 Taken this morning in Albuquerque.

My free entertainment this morning was a rainbow of color over the Sandia Mountains, the reflection of which I caught with my camera — you know, because I was awake.

The temperature is supposed to top out at 60 degrees today (that’s American degrees), but the weather people are watching a storm that may arrive on Saturday.  Good, I love storms.  Lots of great clouds come with bad weather, which I get to take pictures of, then figure out what they look like.  It’s called free psychiatric care. 🙂